While the map screen is shown your mobile device will for your convenience not automatically switch off any longer. You have to leave this screen in order to return to automatic (timed) switch-off for power conservation. Of course, manually switching on and off your mobile device still works as usual. 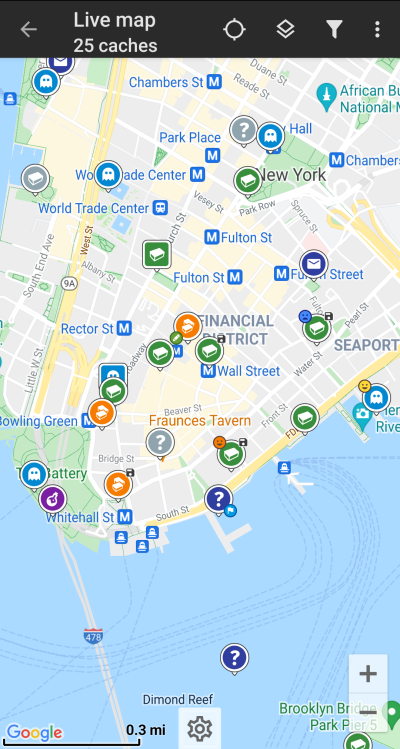 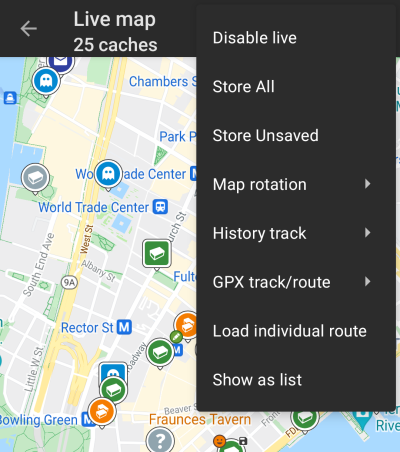 The icons shown in the top bar and the contents behind the overflow menu button are distributed dynamically based on your device resolution and screen orientation. Thus it might be possible, that more or less items can be found behind the menu button or instead shown as icons in the top bar on your device.
In case a menu entry is shown as an icon you can long press the icon to get a popup showing its function.

The map will use your selected map type and show a live view of all available caches on the displayed location.

The live map always shows a combination of caches loaded live from all your enabled geocaching services as well as caches stored in your cache lists.

The following table describes the different marker types used on the live map.

The table will only describe the different icon types, but not the different types of Geocaches. Tap on the following links to get information about the Geocache Type Icons in c:geo and Geocache marker icons in c:geo, which are used throughout c:geo.

If you tap on a cache icon on the live map the following popup windows will be shown above the map, providing additional information for the selected cache: 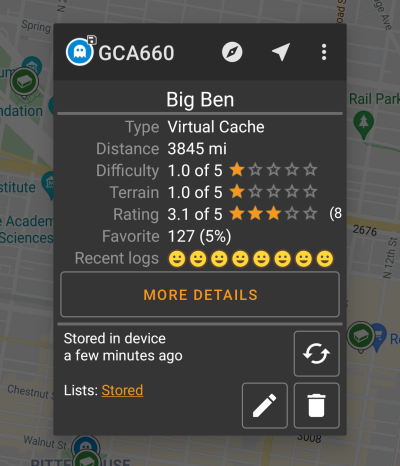 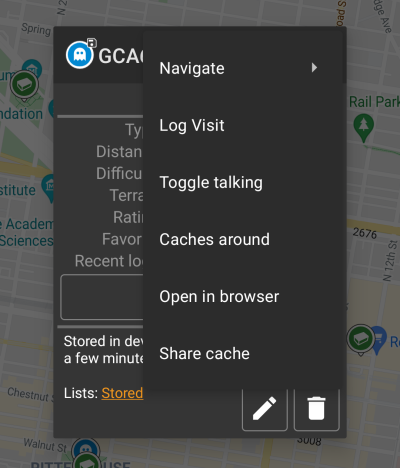 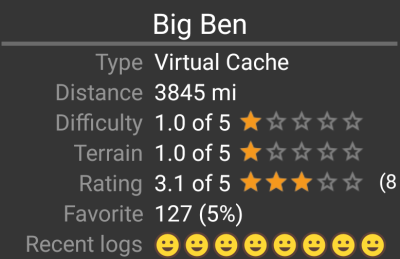 This section of the map popup provides several options to manage the storage state of the selected cache.

After selecting the quick settings button, which is shown on bottom center of the map the following settings screen will be shown: 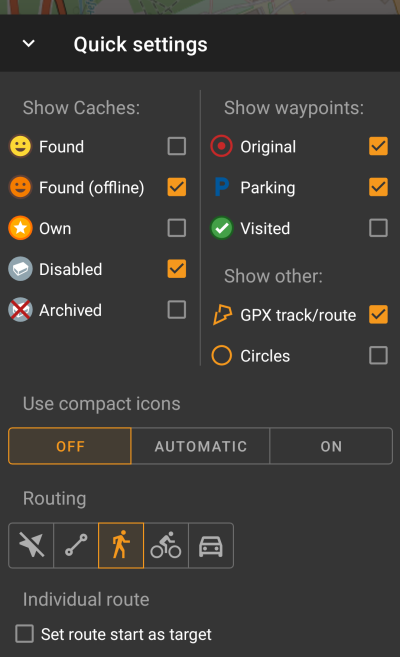 To get the most out of the direction line and individual route it is recommended to install and configure the BRouter app as described in the linked section of our user guide. This will enable routed lines instead of just a straight connection line.

The different line and track types are described in more detail below.

The direction line is a map line which connects your current position with a chosen target cache/waypoint. This can be either a straight line or a routed line if you have BRouter installed and configured.

The default line color is red but line color and additional appearance parameters can be configured according to your needs within the map line customization settings.

The example below shows the typical appearance of the direction line (with and without Brouter).

There are two ways to activate the direction line:

You have the possibility to load a GPX track/route file which is then shown on the map. For example cache owners might provide a GPX-track/route file to follow a certain route to find a cache, or you can generate such GPX track/route with other routing tools. Tracks and routes both are basically GPX files, one having a recorded track of positions (track file), the other (route file) only some waymarks, for which c:geo will route you from point to point.

The default line color is green but the line color and additional appearance parameters can be configured according to your needs within the map line customization settings.

The example below shows the typical appearance of an individual GPX track/route. 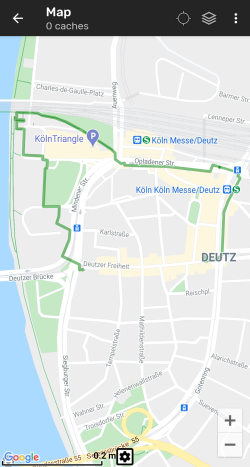 To load or unload a GPX track you have to use the map menu items below GPX track/route in your map menu: 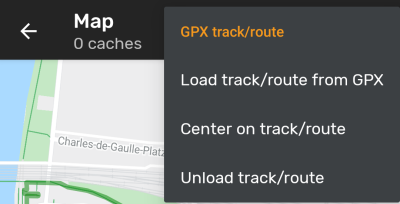 An individual route can be created by long tapping several caches/waypoints on the (live) map. A route will then be drawn between each of the selected caches/waypoints in sequence of your selection. This allows you to create a custom route between caches and can be e.g. used to plan your caching trip.

To make use of the individual route feature you need to enable the long tap function on the map in your map behavior settings.

The route points will either be connected by a straight line or a routed line if you have BRouter installed and configured. Using BRouter for this function is highly recommended to get the most out of it.

The default line color is blue but the line color and additional parameters can be configured according to your needs within the map line customization settings.

The example below shows the typical appearance of an individual route. 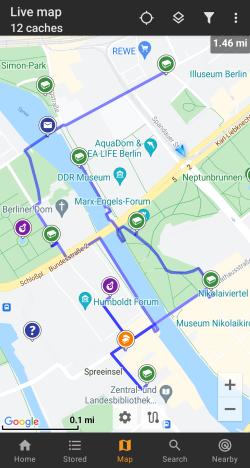 While you can add and remove caches/waypoints to/from your rote by long tapping them, there are also some additional functions, which can be found below the menu item Individual route in your map menu: 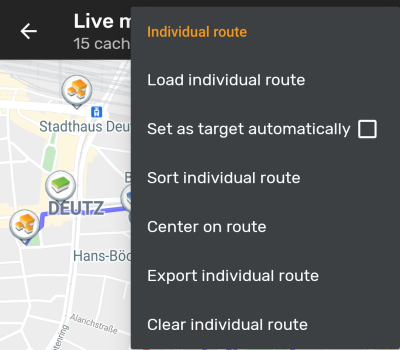 The history track provides a line of your position history (your movement) on the map. You have to activate the history track in your map content settings, where you can also configure additional parameters (such as maximum length of the track).

The default line color is black but the line color and additional appearance parameters can be configured according to your needs within the map line customization settings.

The example below shows the typical appearance of a history track line. 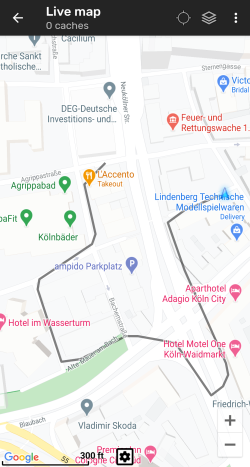 To configure the history track you can use the map menu items below History track in your map menu: 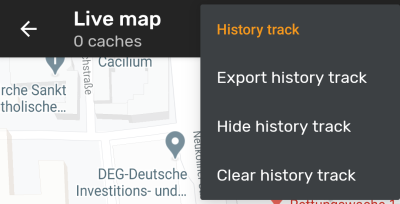 While using the direction line and/or individual route c:geo will also provide several distance figures at the top of the map (can also be seen in the dedicated screenshots above). The distances are shown in meter/kilometer or feet/mile depending on your settings.

Depending on whether you use one or both lines and whether you activated to show the straight distance in addition to the routed distance (only if Brouter is installed) in your map content settings several distance figures might be shown.

The picture below shows a combination of all possible distance figures. Additionally the chosen target cache/waypoint is shown on top left is the direction line is active.

Some or all of these distance figures might be shown depending on configuration and active navigation lines: 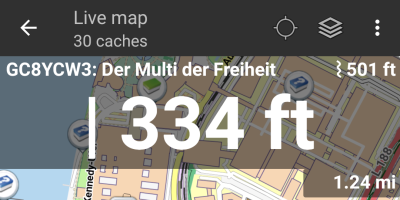 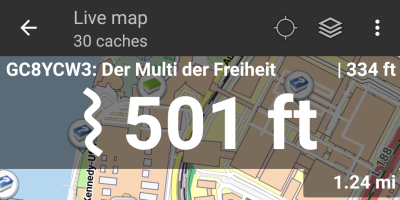 This website uses cookies. These cookies are used to store your login status (if enabled) and your personal preferences (such as language selection). There are no tracking cookies or other scripts involved. By using the website, you agree with storing cookies on your computer. If you do not agree please leave the website or delete the cookies anytime you want as they are not essential to use this website.More information about cookies
en/mainmenu/livemap.txt · Last modified: 2021/01/23 22:43 by lineflyer